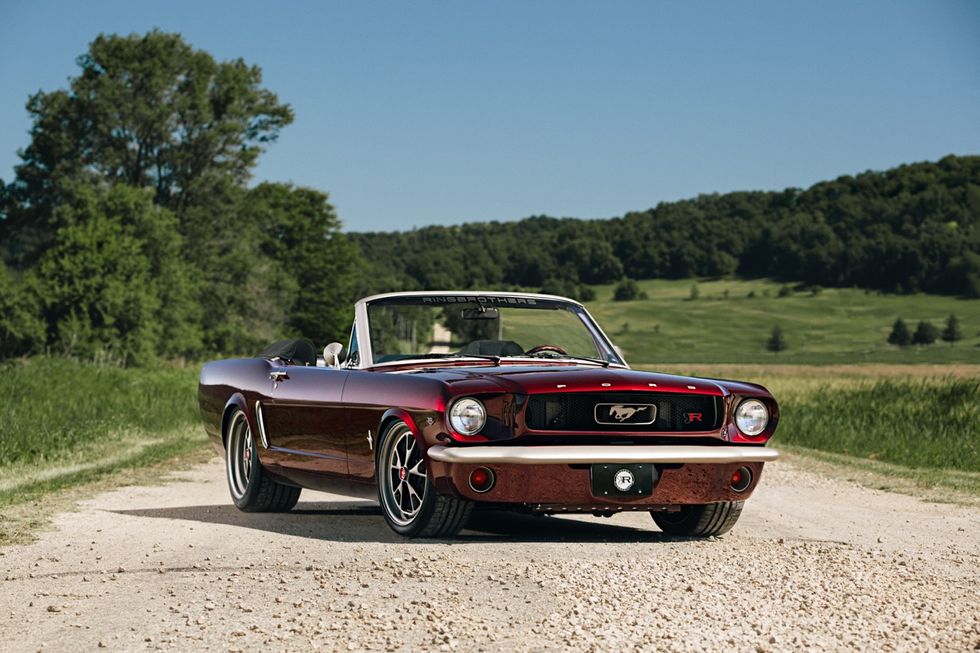 the ringbrothers have taken the cloth off their most recent restomod, a mustang convertible they're calling "caged." the car was designed in conjunction between the firm and the customer, who asked for a "subtle, stock-like appearance." hidden under the familiar body lines is an extensively reworked chassis. the bodywork was widened and lengthened by one inch, and the chassis was converted into a unibody.

putting more than 4000 hours into the process of building the car from start to finish, in ringbrothers fashion, the end product is one of a kind. the only factory mustang parts used in the build are the center caps for the wheels. "every piece of this car has been touched and updated with the original design cues in mind, down to the iconic mustang taillight bezels, gas cap, and running horse emblems," according to jim ring of ringbrothers.

tucked under the hood and behind a redesigned front grille sits a 5.0-liter coyote v-8 crate engine paired to a 10-speed automatic transmission. exhaust is handled by custom-built headers and a flowmaster exhaust system. "caged" rides on a set of 18-inch evod industries wheels meant to mirror the style of the original rally wheels, while shock absorption is performed by penske racing shocks rs edition coil-overs. the car also features an independent rear suspension and a set of baer brakes to slow the new old horse down.

"caged" is a passion project built with the objective to evolve and modernize the original mustang's bodywork while also staying true to its aesthetics, and according to jim ring, “there's a lot of nuances that went into the design, and we're proud of that aspect of the build. only the expert eye will be able to discern the subtlety of the differences."