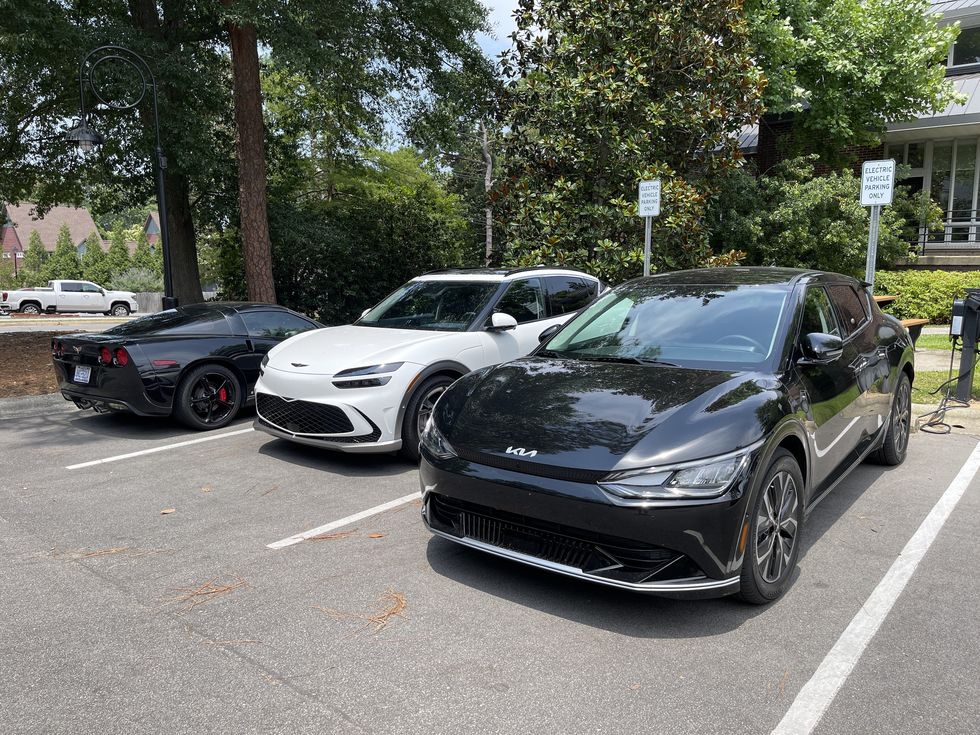 politicians have to run on some kind of platform, and ben moss—my incoming state house representative here in north carolina's district 52—decided that his animating principle is being mad at electricity. to prove his animosity toward this invisible menace, he's sponsoring house bill 1049, which would allocate $50,000 to destroy free public car chargers. it contains some other enlightened ideas, but that's the main theme: we've simply got to do something about these free public chargers, even if it costs us $50,000! those things cost tens of cents per hour, when they're being used.

of course, there's a caveat here. moss isn't saying that free public level 2 chargers—of which there are three in my town, with plans in the works to convert to paid kiosks—definitely need to crushed by a monster truck. that rule only comes into play if a town refuses to build free gas and diesel pumps next to the ev chargers. so anyway, warm up el toro loco, we're smashin' some car zappers!

but what about private businesses? you ask. don't worry, moss hasn't forgotten that a business might put a charger on its property as an inducement for ev owners to patronize the establishment. and small business is the heart of the local economy. that's why he's staying out of the way when it comes to private property. just kidding! ben moss cares about the consumers being harmed by these hypothetical free chargers—namely, any customer who arrived via internal-combustion vehicle, or on foot, or in a sedan chair. why is someone else gaining some advantage based on a decision they made? that's not how life works.

thus, house bill 1049 decrees that all customer receipts will have to show what share of the bill went toward the charger out in the lot. that way, anyone who showed up for dinner in an f-150 (not the electric one) can get mad that their jalapeño poppers helped pay for a business expense not directly related to them. it's the same way you demand to know how much applebee's spends to keep the lights on in its parking lot overnight, when you're not there. sure, this will be an accounting nightmare, but it'll all be worth it if we can prevent even one person from adding 16 miles of charge to a nissan leaf while eating a bloomin' onion—not that restaurants around here have free chargers, but you can't be too careful. now, there is a charger at the neighborhood ford dealership, which is marking up broncos by $20,000. coincidence? i think not.

critics of this bill might point out that increasing the number of electric cars could actually benefit owners of internal-combustion vehicles, thanks to reduced demand for petroleum products—kind of like how, during the colonial pipeline gas shortage, there were no ford mustang mach-es in line at the local pumps. or, to put it another way, if the price of paste skyrockets because your local politicians eat so much paste, those prices might come down if you could get them to eat some crayons. but good luck with that! paste is delicious.

electron heads, as i call them, also like to point out that electricity is generated domestically, so your transportation dollars are staying in the u.s. rather than going to, say, saudi arabia. and if you really want to keep your money in your community, you can hire a local company to install solar panels and make your own electricity. district 52 includes numerous electricians, and duke energy utility workers, and solar installers. but no oil rig workers—yet!

which brings me to another point that's not at all related but i'll make it anyway: what we need in this area is more jobs, not more free public car chargers. and yes, electric-car company vinfast is building a 2000-acre factory just up the road that will employ 7500 people, and toyota is building a battery factory outside greensboro that'll employ 1750 people. but let's remember that house bill 1049 would also create a job, for the person who goes around and rips out the free public chargers—until that's done, which would probably be the better part of a week.

and in fact, we could create even more jobs if we extended this philosophy to other public facilities that not everybody uses. why should there be a library when i don't like books? why are there schools? i'm not a kid. don't get me started on all those roads that go places i've never been, and all those town fire trucks that haven't come to my house except for that one time. maybe we don't tear all that stuff down, just as long as we can instill the general feeling that someone else is getting away with something.

i don't know about you, but i'm feeling it already.