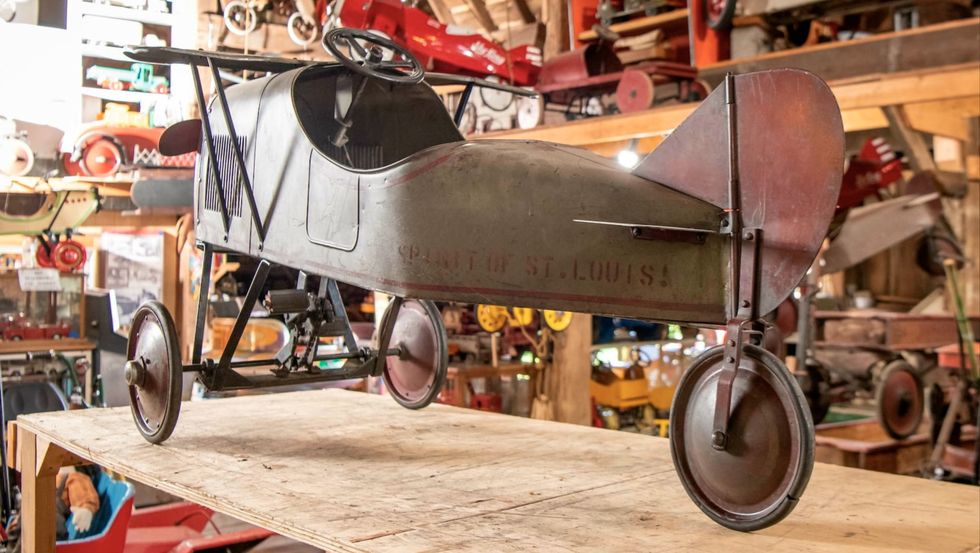 pedal car enthusiasts out there might want to start measuring their available storage. the elmer’s auto & toy museum is selling a significant portion of its collection through mecum auctions later this month, and the lot includes almost 800 classic pedal cars.

some of these classics are 100 years old, like a 1920s steelcraft buick pedal car or a 1927 american national lincoln pedal car with many original parts like the windshield frame, hood ornament, and spare disc tire. the current bid is $100. the 1950s hamilton jeep wrecker with two horns (obviously great for kids) and an amf red mustang also caught our eye.

most of the pedal cars up for auction have been updated and repainted over the years. if you're thinking of getting these not to be kept as a collectible but for kids to actually ride on, we think the pedal airplanes—basically pedal cars with stubby little wings on the sides—or pedal cars with airplanes painted on their sides, like the blue and white strato-flite pedal car pictured below, might do the trick. if the little ones enjoy role-playing adult work, then perhaps check out the customized mack c-cab pedal car painted to look like a conoco oil truck.

if your tastes run more to pedal cars that aren't pedal cars anymore, elmer's auto & toy museum has you covered with a champion model that has been restored and then modified and turned into a remote-control (rc) car. it even comes with a doll "driver."

there are almost 2000 items from elmer's auto & toy museum included in the auction lot, including plenty without any reserve limit. aside from the pedal cars, there are more than 230 bicycles and tricycles and around 120 sleds, carriages, and ride-on toys. a handful of classic full-size vehicles, about 120, will also be sold.

the auction runs from september 14–17. bidders can name their price in person, via phone, or on the internet but must be registered before bidding. new ride-on pedal cars can cost anywhere between $100 and $1000.