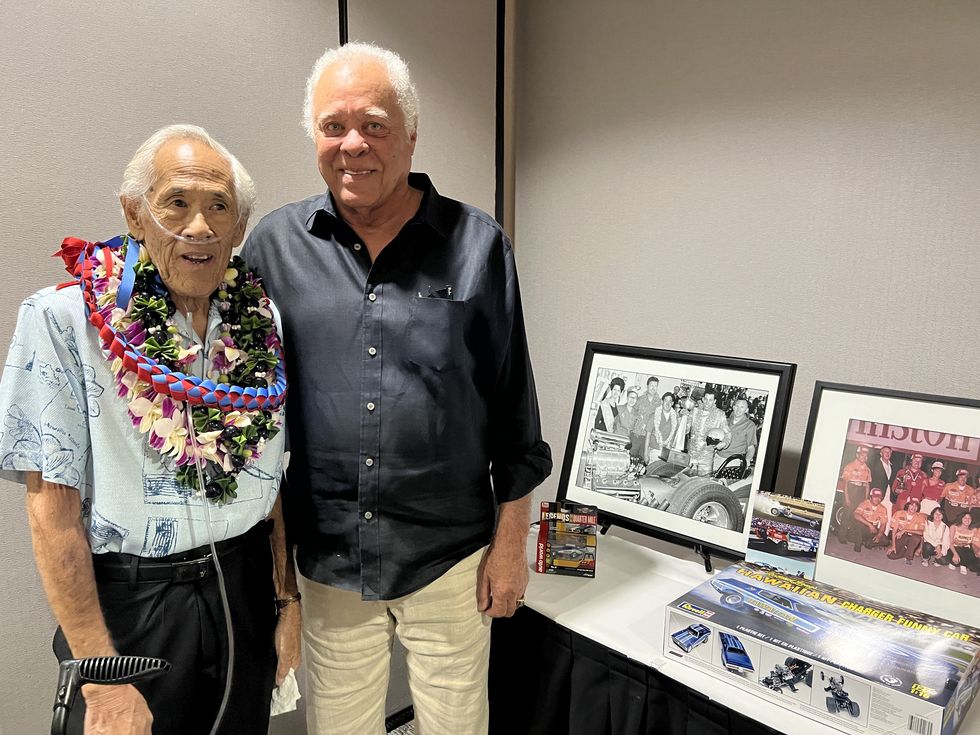 Good things come from the Hawaiian islands: chocolate-covered macadamia nuts, surfing, and winning racers. Danny Ongais, who raced everything from Top Fuel to F1; John DeSoto, motocross legend; and Roland Leong, famed Funny Car tuner, share more than their island birthplace: as of August 2022, they are now the only wheeled inductees in the Hawaii Sports Hall of Fame.

We’d say they were the only motorsports representatives at all, but that would leave out Thomas Gentry, powerboat racer.

Leong is the most recent inductee, officially joining the list in 2020, but due to COVID only celebrating the honor on August 25, 2022, when the Hawaii Sports Hall of Fame finally held its much postponed banquet. We were on hand to cheer as Leong took the stage, introduced by his first driver, Don "the Snake" Prudhomme. It was the first time the two men had been in Hawaii together since they met in 1964.

Leong grew up on Oahu, racing cars on the streets, much to the dismay of his parents. “My dad had a master's degree from Harvard. My mother was also a college graduate, very rare for a woman in the '30s. They were respected businesspeople. I didn’t graduate high school and I wanted to be a drag racer. They weren't pleased."

Leong's dad didn’t talk to him for years, but his mother came around and supported him as he moved from street racing to running a dragster at the island's only track, Kahuku Dragstrip. Leong held the gas dragster record of 8.50 at 180 mph when he met Prudhomme, who was piloting the Greer, Black, Prudhomme nitro dragster, shipped over to make exhibition runs on the island's new, bigger dragstrip. The two hit it off, despite the fact that Prudhomme could barely understand Leong's mix of Hawaiian slang and accented English. It didn't matter; talking cars was a common language.

Later that year, Leong was in California, working for a chassis shop and building a top fueler of his own. The first drive didn't go well. "I guess I was supposed to only go half track? I didn't know that," says Leong, with the easy cadence of a much-told tale. "I didn't know where the parachute handle was, and by the time I found it, I'd driven off the dragstrip. [Engine builder] Keith Black wasn't pleased. He said he couldn't support me if I drove, because he didn't want to tell my parents I'd been killed in a car.”

Black recommended Prudhomme, as their partner in the G-B-P car was calling it quits. Prudhomme started driving for Leong and took the new car, appropriately named "The Hawaiian," to victories at the NHRA Pomona Winternationals and the Indy U.S. Nats along with countless match race rounds. “I always tell Prudhomme he's lucky I wasn't worth shit as a driver or he wouldn't have had a career,” says Leong. "Sometimes I think of how odd we must have looked in '65, on the road across America, a Chinese-Hawaiian and a Black guy, often the only ones in a restaurant. We never had any trouble, though. I guess people liked the car too much to worry about who was with it."

Prudhomme left Leong the next year, a decision he says he regretted as he watched the Hawaiian repeat victories at the Winternationals and the U.S. Nats with a different driver behind the wheel. Leong would become infamous for his changing roster of hotshoes. "Not everyone had the same desire to win as I did," he says with a shrug.

In 1969, he built a Funny Car, noting that the bodied fuel cars were more popular with the fans and had more opportunities to match race than the long, naked rails. Leong's “Hawaiian” cars won regularly, including the famous Bakersfield March Meet in '67 and '83, and another U.S. Nationals win in 1991 with a car that would later set a record as the first Funny Car over 290 mph. His last year as a team owner was 1993, but he continued working as a hired crew chief, including rejoining his old buddy, the Snake, to tune the Copenhagen Funny Car with a young driver named Ron Capps behind the wheel. They finished second by a narrow margin to John Force in the championship in 1997.

One might consider that a solid career, but Leong continued to tune nitro cars after leaving the NHRA "big show," working for nostalgia racers running in the NHRA's heritage series. Through it all, Leong has stayed friends with many of his teammates, including Prudhomme. Now 78 and 81 respectively, the Hawaiian and the Snake still act like they're in their early twenties as they were when they met, pointing out hot cars and ribbing each other about their various failings. "You know, Snake and I would have lunch every day in Van Nuys," said Leong. "He was working at a paint shop, and I convinced him to go on the road with me in '65, so he quit, and he hasn't had a real job since."

That's one way to describe Prudhomme's 389-round winning career, but then, Leong has known him since before he was a big shot, back when they were both just kids talking cars in Hawaii, never imagining they'd be back for a Hall of Fame induction nearly 60 years later.

Leong was inducted as part of the 2020 class, along with surfer Ben Aipa and racquetball champion Egan Inoue. The 2021 inductees, honored at the same celebration, included volleyball champ Reydan "Tita" Ahuna and sports promoter Larry Price. The Hawaii Sports Hall of Fame is a state-run museum recording the accomplishments of Hawaii's athletes in all forms of sport.