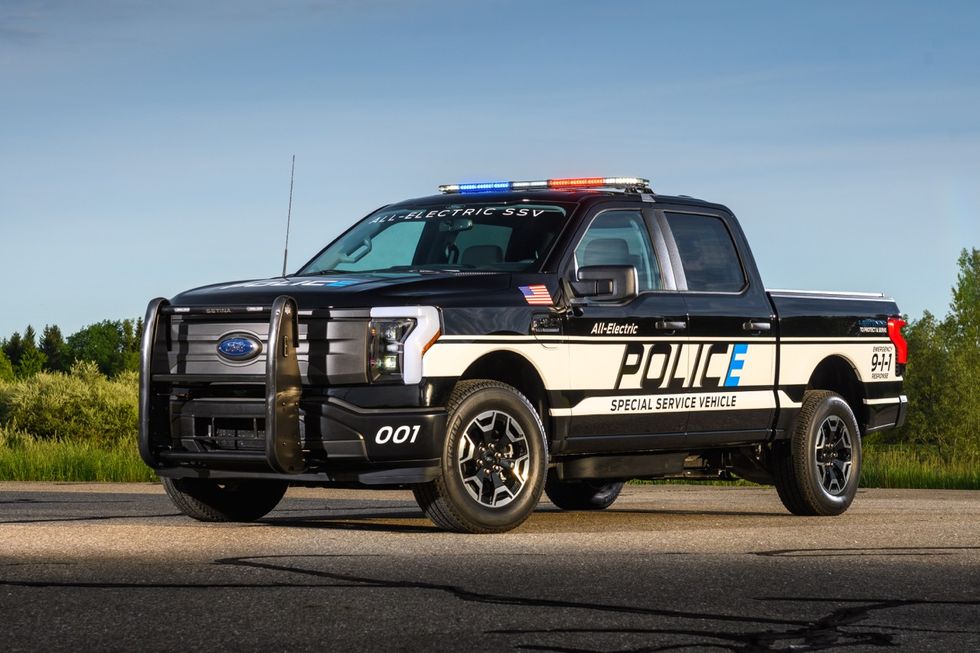 sometimes cars are so good at what they do they become the first image in your head when you hear that thing. for police cars, that is easily the crown vic. of course, police departments have had other choices, including police cruisers like the dodge charger pursuit vehicles. many departments are also leaning toward the do-it-all capabilities offered by trucks. they should be interested in the new police version of the f-150 lightning, the pro ssv (for special service vehicle), and it will be interesting to see how many municipalities will become early adopters of the ev as police vehicle.

the ssv version of the lightning is not so different from the ev pickup it's based on, itself very new on the market. the 12.0-inch display in the center of the dash is the same found in the normal lightning. performance numbers remain the same across the lineup as well, with 452 horsepower out of the standard-range battery, and 580 crime-fighting horses from extended-range models. also shared with the normal lightning is the claimed 4.0-second time to 60 mph, which would beat all police vehicles but the ford mustang mach-e police prototype tested by the michigan state police, also at 40 seconds to 60 mph. range figures are likely to be similar to the standard lightning at 230 miles for the smaller pack, 320 for the larger, though exact numbers have not been confirmed.

the ssv will come equipped with the same "police-grade heavy-duty" cloth seats from the f-150 police responder along with the expected roof-mounted led warning beacons and steel "intrusion plates" in the front seatbacks. and it will have the lightning's much discussed pro power onboard, which ford notes could serve as a mobile power source at accident scenes.

ford has yet to release details regarding pricing or delivery dates for the lightning ssv, though more details are expected some time later this summer. range figures should also be released at that time.