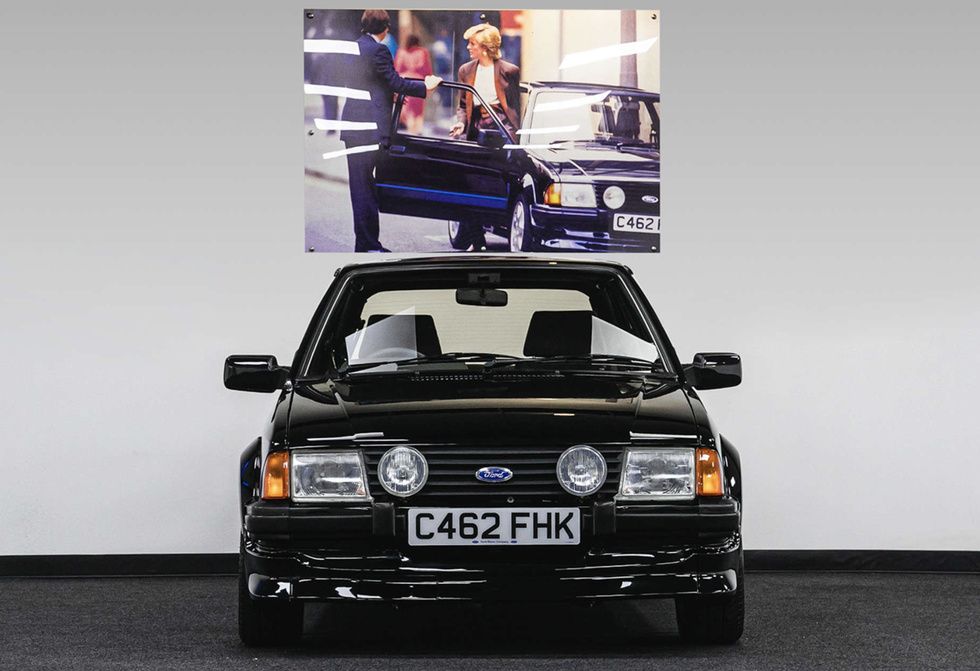 one month before the royal couple married in the summer of 1981, prince charles gave lady diana spencer a silver engagement present. no, not jewelry; it was a ford escort ghia sedan, with the 1.6-liter engine. the car had four doors and 79 horsepower and was in all respects quite ordinary and even deeply boring. in an era of austerity for many british commoners, charles's gift broadcast a message of respectability: the newest addition to the royal household would upset no teacups. but as we now know, a coming tempest was brewing, and just four years later, princess di was coming on boost.

specifically, her royal highness was spooling up the boost on this little rocket, her 1985 ford escort rs turbo, which coming up for sale at auction on august 27. it was never sold on this side of the pond, but any fan of performance-oriented fords will have clocked the rs designation and correctly deduced that the princess's tastes extended to a pretty serious hot hatch. perhaps even to some royal hoonery?

diana's escorts were third-generation cars, and she had three of them. after the rear-wheel-drive mark i and mark ii escorts—both still popular with collectors and vintage rally racers—ford's european small family car now came with front-wheel drive. it was a modern choice for a modern british family. it took the escort just two years to be crowned the bestselling car in britain.

seeking to stir up a little excitement to fend off the likes of the volkswagen gti, ford developed a tuned version of the two-door escort hatchback called the xr3 (later xr3i, as fuel injection arrived). the xr3 was scrappy enough for its day, but the relatively new technology of turbocharging promised performance dividends.

the escort rs turbo was the fastest the third-generation escort got. thanks to an aluminum head, an uprated camshaft, and factory turbocharging, output was 132 horsepower at 6000 rpm, with a boot of 133 pound-feet of torque at 3000 rpm. not huge figures by today's standards, but pitted against a curb weight that was barely over 2000 pounds, the rs turbo was plenty quick.

initially, diana replaced her meekly humdrum ghia with a bright-red convertible escort, but the move upset her security detail. the droptop was simply too high-profile. messages passed back and forth between the royalty protection command and ford's pr division, and a compromise was reached. diana would get the escort rs turbo she wanted, painted black on the production line, the better to fly below the radar.

while almost all other escort rs turbos were white, the three black cars were built for diana and her protection detail. she drove hers often between 1985 and 1988 and was often spotted driving around london, usually with the young princes william and harry in the back seat. a plainclothes detective rode shotgun.

one of the three, the car diana herself drove, crosses the block at silverstone auctions on august 27. the car is offered at no reserve and is expected to fetch at least six figures, owing to its connection to a still beloved public figure.

in a time when fractures were appearing in her fairy-tale marriage, this unlikely hot hatch represented one more facet of princess diana's independence. the expectation was that she would be modern but dutiful, a four-doored people's princess. what emerged was a freer spirit, one determined to keep her own hands firmly on the wheel.

in her hot little turbocharged escort, out running around town, diana did just that. revs climbing, turbo spooling torque, bodyguard nervously reaching for the grab-handle on the roof as the next sharp corner approaches. she lived her life like a cambelt in the wind.