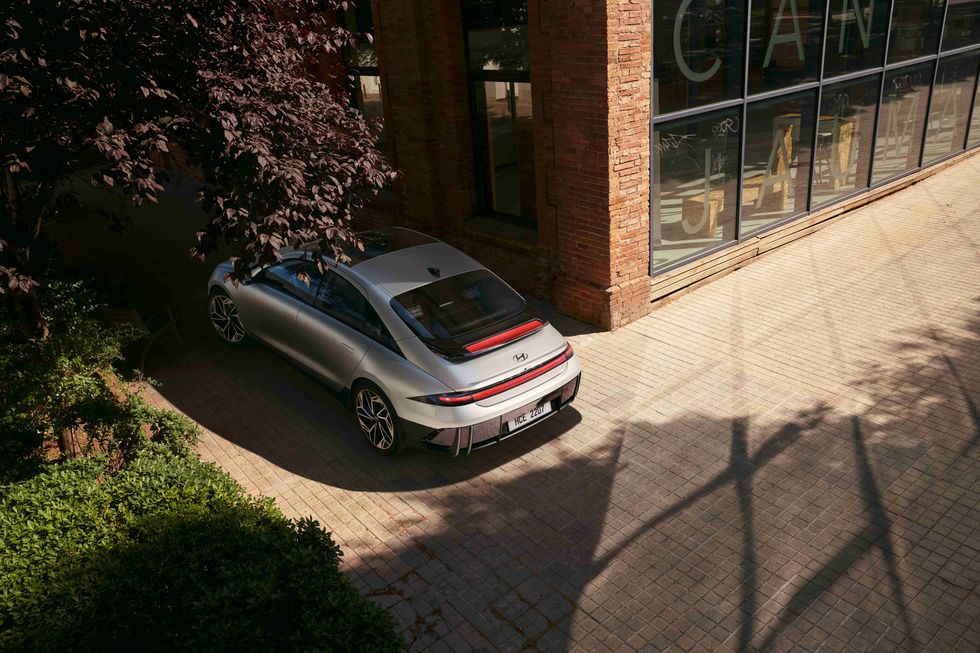 one look at the new ioniq 6 “electrified streamliner” sedan is all it takes to see why that nickname fits. it rides on a 116.1-inch wheelbase that’s 2.0 inches shorter than the ioniq 5's, but that allowed its 191.1-inch body, which is 8.6 inches longer than the 5's, to be drawn out into a sleek shape with a distinctively tapered “boat tail” rear end that produces a very slick 0.21 coefficient of drag. the fact that its roof stands 4.1 inches shorter than the boxier ioniq 5 certainly helped vp of hyundai design simon loasby and his design team achieve that goal, but the lowered roofline also has the added benefit of dramatically reducing the ioniq 6’s cross-sectional area, which makes its low drag coefficient (cd) that much more significant because total drag is a function of cd multiplied by cross-sectional area.

on paper, the powertrain offerings look very familiar to the ioniq 5's because the two cars are both built on hyundai’s electric-global modular platform (e-gmp). you'll have the choice of either single-motor rear-wheel-drive and dual-motor all-wheel-drive configurations. overall power output of the dual-motor version matches that of the ioniq 5, with the awd ioniq 6 delivering 321 combined horsepower and 446 pound-ft of torque.

likewise, two battery capacities will be offered, with the rear-drive model available with either a 53.0-kwh or 77.4-kwh pack and the awd model coming exclusively with the larger pack. as with the ioniq 5, the powertrain’s 800-volt architecture allows the car to take advantage of high-output 350 kw dc fast-charging stations, which will reportedly lift the battery from 10 to 80 percent charge in just 18 minutes.

but the ioniq 6 is said to be far more efficient than the ioniq 5, and with that comes a significant boost in range. hyundai predicts that rear-drive versions with the 77.4-kwh battery will be good for over 610 kilometers on the european wltp cycle. by comparing that to the ioniq 5’s confirmed wltp and epa figures, we estimate that the ioniq 6 could earn an epa rating of some 400 miles.

the slippery shape of the ioniq 6 plays a huge role here, but hyundai engineers we spoke with also said the 6 also benefits from a few powertrain optimization developments, including next generation semiconductors in the inverter, reworked motors that now feature hairpin windings, and a re-optimized control strategy when switching between single-motor and dual-motor operation in the all-wheel drive version.

the streamlined ioniq 6 looks significantly different from the minecraft-inspired ioniq 5, but if you look closely you’ll see pixelated details built into the head- and taillights that are an ioniq signature element. inside, the dual-screen instrument panel/infotainment interface is present, and the 6 feels spacious front and rear despite its slightly shorter wheelbase. our 6-foot 2-inch tester was able to sit behind himself quite comfortably, which is a neat trick considering the aggressively tapered roofline. on the other hand, the designers are more excited than we are about their decision to use center-mounted window switches that allow for naked doors, and we’re not sure how the speed-synchronized ambient lighting, which gets brighter as speed increases, will play out in the real world. we assume/hope there will be an “off” button.

specific details about the configuration, performance and pricing of the north american version of the ioniq 6 will not be released until november’s l.a. auto show, and the production of units bound for these shores will not commence until the first quarter of 2023. still, we’re excited by the truly amazing range estimate that hyundai has revealed. the ioniq 6 looks set to offer a substantial boost over the competition, and that will be even more significant considering the e-gmp platform’s 800-volt architecture and superior dc fast-charging capability, which we’ve already experienced with the ioniq 5.