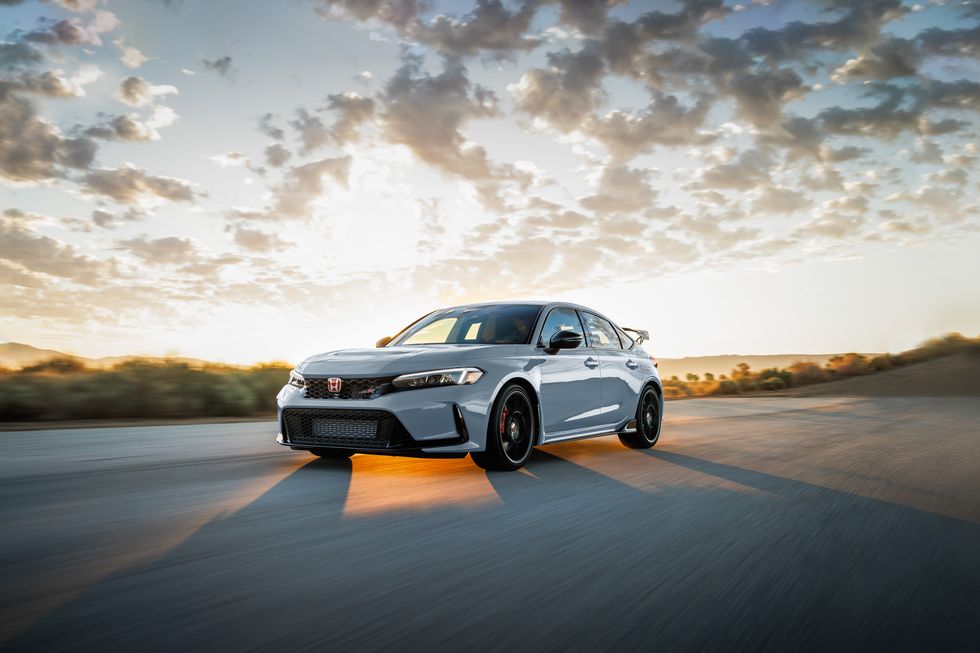 honda has revealed the latest civic type r like a multi-course meal, serving up details piece by piece. we savored the first photos and few specs that came out in july, but we've been starving for the juicy technical details, many of which the company finally released today.

ladies and gentlemen, the 2023 honda civic type r has 315 horsepower and 310 pound-feet of torque. that represents an increase of 9 ponies and 15 pound-feet compared with the previous-generation car, which had totals of 306 and 295, respectively. max horsepower now arrives 100 rpm sooner at 6400 rpm, whereas peak torque is produced between 2600 and 4000 rpm. previously, peak torque was available from 2500–4500 rpm.

while the new ctr features the same k20c1 turbocharged 2.0-liter inline-four as before, honda made myriad modifications that contributed to the power boost and that it claims will improve engine response. the enhancements include a freer-flowing air intake, a redesigned turbo, and a revised exhaust system with an active valve that now opens at higher rpm.

we already knew the new type r would have a standard six-speed manual. however, we didn't know what changes, if any, honda made to the diy transmission. now, we're told that the six-speed has a stiffer shift lever and updated shift-gate pattern that together are said to make gearchanges more precise and satisfying. plus, the '23 ctr has a lighter flywheel, and honda says it revised the transmission's rev-match feature to work better. while rumors swirled about a possible dual-clutch automatic, that isn't currently part of the picture.

honda says it spent lots of time testing the newest civic type r on racetracks around the world. the most notable names the company dropped are germany's nürburgring and japan's suzuka circuit, where the type r set a track record for a front-drive production car. we hope all those development hours pay dividends when the production versions start hitting local road courses.

among the various track-minded improvements made to the r-rated civic is better engine cooling. honda says it accomplished this by enlarging the car's grille opening and bolting in a bigger radiator with a large-diameter fan. also addressed are the brakes, which are said to benefit from better cooling and an updated brake booster that supposedly makes the pedal easier to control.

while honda hasn't said exactly how much the new type r weighs, a spokesperson told car and driver that its curb weight has "gone up slightly." the ctr also now rolls on 19-inch wheels that are smaller than the old 20-inchers, which might reduce unsprung weight, but we can't say for sure. the new rollers are wrapped with michelin pilot sport 4s summer rubber that is 0.8 inch wider and has a slightly taller sidewall.

as for the rest of the civic type r's chassis, its front track is 1.0 inch wider and its rear track is 0.8 inch wider than its predecessor. honda also says it retuned the dual-axis strut front and multilink rear suspension, but it doesn't say what specifically is changed, other than it should provide better steering feel and straight-line stability. the hatch's new bodywork, including hips that are 0.6 inch wider, is more aerodynamic than before and is said to generate more downforce. also, its body structure is said to be more rigid than before.

without a doubt, the most important detail about the 2023 honda civic type r that we're still waiting to find out is how much it'll cost. we think its starting price will likely end up around $39,000, but honda says we'll have to wait until closer to the car's launch this fall to learn pricing—the final piece of this multi-course reveal.