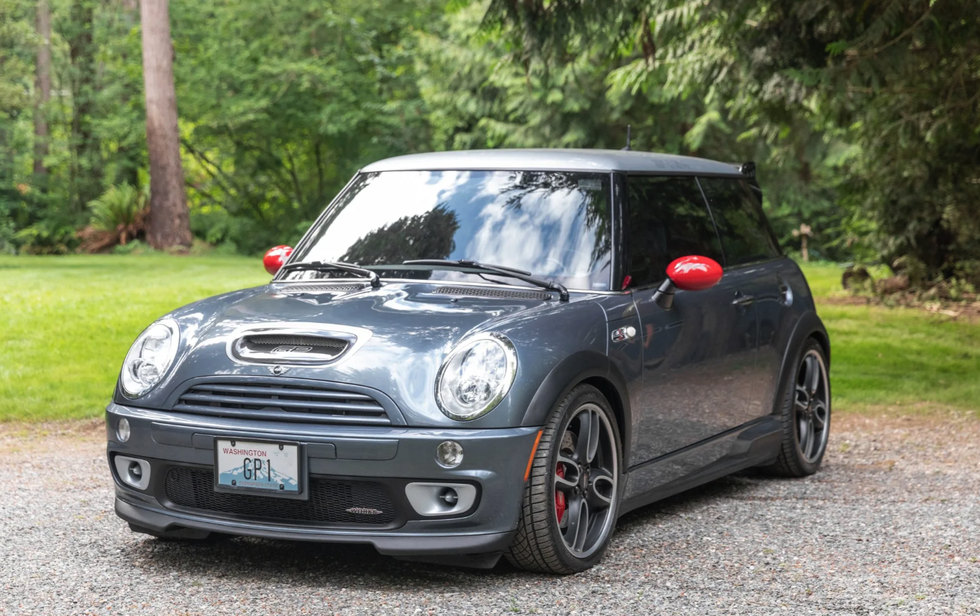 • the example for sale is one of only 415 sold in the united states, modified for more power and improved handling.

• the mini will be up for auction until wednesday, august 3.

the quickest front-driver we've ever tested is a mini cooper john cooper works gp. that's what mini owners call the gp3, the third generation of the most powerful and littlest car in production. the mini here is the original gp1 from 2006. take our word from spending three days with 700 minis and their gallivanting owners: any gp grants you instant respect.

on bring a trailer (which, like car and driver, is owned by hearst autos), there are so many unattainable supercars it's starting to look like the dupont registry. so, today, we’re delighted to feature a limited-edition foreign car that's currently at a $14,500 bid.

the first-gen r53 mini was a retro design that outlasted its direct competitors, the volkswagen new beetle and the fiat 500. evolutionary changes mean this half-german brit looks just as attractive and relevant as a brand-new mini. it's one of 415 gps sold in the u.s. out of 2000 worldwide. small cars with big power are back in vogue, but in 2006, it was basically the mini jcw gp and the mazdaspeed 3. the dodge neon srt-4, discontinued after 2005, was a lincoln town car when parked next to a mini.

the jcw gp was a quicker, lighter version of a quick and featherweight mini, the john cooper works. an ordinary jcw came from oxfordshire as a stock cooper s. mini dealers modified the engine and exhaust with a factory-supplied kit that took the supercharged 1.6-liter inline-four to 200 horsepower and 177 pound-feet of torque without touching anything else. the jcw gp, despite being labeled a "kit," was built by bertone in italy. the italian mods included a new eaton supercharger, a more efficient intercooler, high-volume fuel injectors, a remapped ecu with a higher rev limit, and a sport exhaust. total output, sent through a limited-slip diff: 218 hp and 184 lb-ft.

upgraded suspension, unique four-spoke 18-inch wheels, larger brakes, revised bumpers, side sills, and a rear wing distinguished the gp's exterior. without a rear seat or air conditioning, the gp shaved an impressive 110 pounds. with cold air blowing at our faces, we measured a 62-pound savings (for 2609 pounds total). stock, it pulled 0.90 g on the skidpad and hit 60 mph in 5.9 seconds—a half-second quicker than a jcw. every gp came in thunder blue with red mirror caps.

mini organizes a rally every two years called mini takes the states. this month, despite $5 premium gas, mini owners trekked from burlington, vermont, to bmw's factory in spartanburg, south carolina. gp cars from every generation stood out among the sea of coopers—especially in the back woods of tennessee, where mini isn't exactly a household name.

it's possible that one or several of this gp's four owners ran the mini rally at some point and then decided stock wasn't good enough. according to the seller, the car's suspension has bilstein b12 struts, camber plates, and new front control arm bushings and a rear sway bar. there's a smaller supercharger pulley and a new air intake for an unspecified increase in output. the brakes are from the second-gen jcw. even the silver-painted interior trim is swapped out for carbon fiber. the original trim, brakes, and a duplicate set of wheels come included.