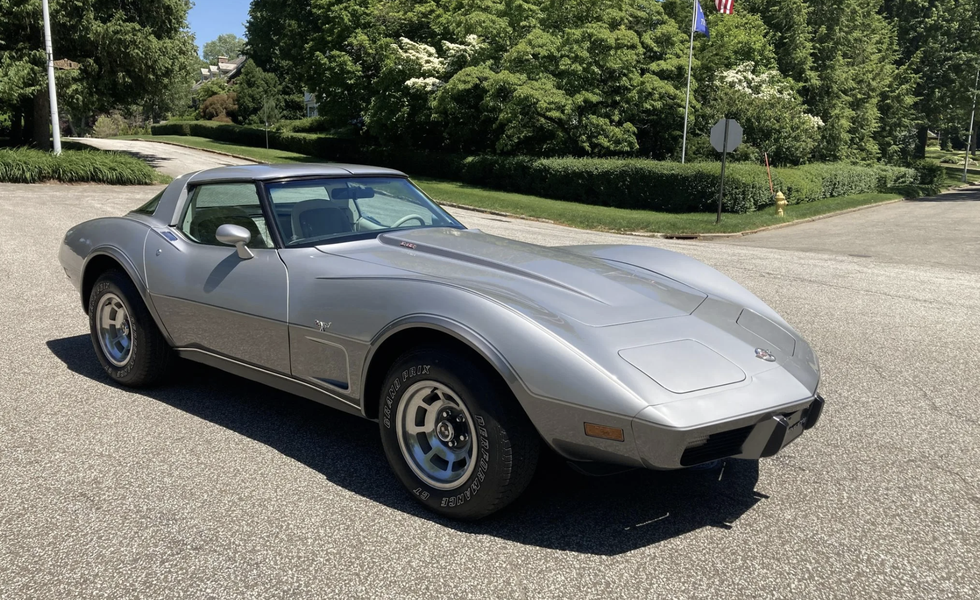 • this 1978 chevrolet corvette, currently up for sale on the bring a trailer website, is a perfect example of a car with the vibe of its time.

• this is a 25th-anniversary edition equipped with a 350-cubic-inch v-8 and a four-speed manual transmission.

• with a weekend ahead of us and bidding slated to end on monday, july 18, the top offer is currently at only $9000.

late c3 corvettes are among the most underloved vehicles in the nearly 70-year run of chevy's fiberglass two-seater. they are harshed on as underpowered, smog-choked rattletraps with burdensome impact-absorbing front and rear bumper covers, and poseur-ific features like mirrored t-tops and pop-up headlamps. however, i've always loved them, and that's why i chose this 1978 chevrolet corvette l82 four-speed to be our bring a trailer pick of the day. (bring a trailer, like car and driver, is part of the hearst autos group.)

perhaps my appreciation of this car is the result of generational imprinting. i was an impressionable tween when they were new. but it is hard to deny their ebullient and admirable loucheness. a corvette—unlike predictable and unyielding long-term nameplates like the porsche 911—is always exactly of its era, both in design and performance. these so-called "soft nose" vettes perfectly capture both the hedonism and nihilism of the disco era.

let's dispense with some problematic hearsay first. while corvette performance did reach a nadir during this era, with base small-block v-8 models producing just 165 horsepower in 1975, this particular vette has the highest possible output of any late c3. its 5.7-liter l82 v-8 thus pumps out a respectable 220 hp.

this was enough to hustle this plastic fantastic from zero to 60 mph in just 6.5 seconds, allowing our own brock yates to proclaim it in these pages "the fastest american production car." for perspective, the 1978 porsche 928 posts nearly identical acceleration times. and while others may debase the fastback rear window styling that debuted on the corvette in 1978, it adds significant storage area in the rear, and became a sleazily sexy hallmark of the model's design that remains to this day.

moreover, this '78 vette was ordered with a number of optional upgrades, including a beefier gymkhana suspension and classy two-tone silver paint, the latter a nod to the model's 25th anniversary, which took place that fateful year. moreover, it comes with a four-speed manual transmission, period correct 15-inch slotted aluminum wheels with proper raised-white-letter tires, a factory eight-track stereo, and working a/c.

in my opinion, this is the apex of late c3 corvettes. in fact, as i type this, i'm also texting my brother—with whom i own four old cars—to discuss bidding. watch for my sordid senescent self to slink down a boulevard near you soon.