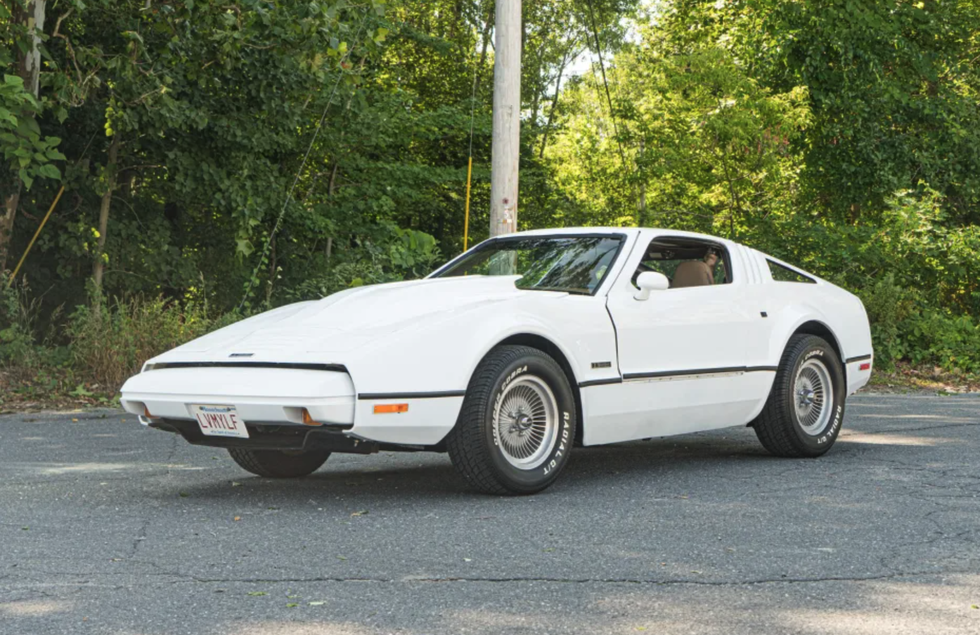 • a canada-built equivalent to the delorean dmc-12, the bricklin sv-1 has many parallels to that legendary car, both in terms of audacity and eventual financial failure.

• the name sv-1 stands for safety vehicle, and this classic has a number of safety innovations that were quite advanced for its day.

• slightly fewer than 3000 sv-1s were built over a three-year period, but fewer than 150 of them came with the four-speed manual like this example currently up for auction on the bring a trailer website.

it is said that icarus, out of pride, flew so close to the sun that his waxen wings melted and he plummeted to his doom. the same fate seems to happen to gullwinged sports cars about once a decade, whether the wings in question are stainless steel (the delorean dmc-12) or bonded acrylic resin (as here). but from the financial ashes, a phoenix emerges, ready to be the center of attention at the next car show its new owner might attend.

and that's the bricklin sv-1, a rare and mostly forgotten 1970s sports coupe. the company folded almost 50 years ago, but the cars still have a small but eager fan base. this one's currently up for auction on bring a trailer, which—like car and driver—is part of hearst autos. with five days to go, bidding sits at just $3500.

malcolm bricklin was a serial automotive entrepreneur with a shoot-from-the-hip attitude and shoot-from-the-hip accuracy to match. he brought subaru to america in 1968, and now you can't visit a hiking trailhead without tripping over a crosstrek. but he also founded yugo, and when's the last time you saw one of those? or wanted to?

between launching these two endeavors, bricklin launched the sv-1, drawing on the financial assistance of the canadian government. a factory was built in new brunswick, the area then economically depressed by the collapse of the local fishing industry, and the car was designed by artcenter college graduate herb grasse, who had contributed to the original dodge challenger.

the idea behind the sv-1 was to embrace incoming u.s. safety regulations wholeheartedly, creating a car fit for modern roads. and not just any car, but a v-8–powered grand tourer capable of going toe to toe with the chevrolet corvette. bricklin's creation would be striking-looking, with gullwing doors and a sharply sloping nose. it would feature futuristic construction materials and have integrated bumpers and a crash structure to protect its occupants.

launched in 1974 with an amc-supplied 360-cubic-inch (5.9-liter) v-8 and either a four-speed manual or three-speed automatic transmission, the sv-1 was a decent performer. there were teething troubles with overheating, but these were soon solved with a radiator upgrade. bigger issues were the new factory and inexperienced workforce, cost overruns, and problematic quality control. six years later, pretty much the exact same problems would kill the delorean dmc-12. they did in bricklin in three.

bricklins can have all kinds of issues to work through, and there are a few with this example. the radio doesn't work, the a/c isn't blowing cold, and the windows stick. this last is a pain to address with the heavy gullwing doors, which weigh about 100 pounds each.

signed by the author

however, this sv-1 has the four-speed manual paired with the 220-hp 5.9-liter amc v-8. that makes it 10 times rarer than your average bricklin, and also quite a bit more fun to drive. provenance is also improved by the signatures of both malcolm bricklin and the late herb grasse.

with its conventional, u.s.-sourced powertrain, a bricklin is a bit tougher than a delorean, and easier to keep on the road in terms of mechanical issues. this example also benefits from an upgraded edelbrock intake manifold and a stainless steel exhaust system.

the sv-1 drives far better than you expect it to, and with the exhaust upgrade this version probably honks like an angry canada goose—they look cute, but canadians call those birds cobra chickens for a reason. a sense of humor is required for ownership, as there's a good chance you'll be propping open one of those gullwing doors with a broom handle at some point. but just think of the stares as you rumble into your local sunday morning car meet-up.

there's a great deal to be said for a car that was a failure in its day but seems quirky and cool now. best of all, unlike owning a delorean dmc-12, you won't have to put up with people cracking wise about flux capacitors and hitting 88 miles per hour. just finish your coffee, pop open the doors, and fly off down the road, 93 million miles away from the sun, a v-8 underfoot, and not a care in the world.

the auction ends on monday, august 22.